The mission of the Abingdon Volunteer Fire Company is to minimize the loss of life and property resulting from fires, medical emergencies, environmental, and other disasters. We will accomplish our mission in a safe manner through prevention, education, fire suppression, medical services, rescue skills, and other related emergency and non-emergency activities and operate within the scope of our resources. The timely delivery of these services enables the Company to make significant contributions to the safety of the citizens of Abingdon and its surroundings. We will actively participate in our community, serve as role models, and strive to effectively and efficiently utilize all of the necessary resources at our command to provide a product deemed excellent by our citizens.
Abingdon Fire Company History

Birth of the Company

At a meeting of the Abingdon Improvement Association held in late 1924 it was discussed by the members that the village needed quicker response to fires. Records indicate that the association concerned themselves with a wide range of problems they faced at that time. Some of their topics for discussion were of things that we take for granted today such as paved roads for safe travel, telephone service, and electricity. In fact, the town did not get electricity until 1927. Fire protection was on the list of great concern that night in late 1924 since the closest fire protection was Bel Air and Aberdeen. There weren’t many fires in those days, mostly field and woods fires, but when they had a dwelling or barn fire it was of great concern because of the delay in communications and the distance that had to be traveled over unimproved roadways to get there, particularly in the winter months when responding often meant traveling on un-cleared roadways.

The original idea was to form a Fire Brigade, a first line of defense until the arrival of the closest fire company. This idea was short lived and a new suggestion was “let’s get our own fire engine and become a fire company. The idea of starting a fire company occurred during a meeting in 1925 which was described by past chief Arnold Harwood who was a young lad at that time. The meeting took place in Lester Tuckers' Store across from the present McComas Funeral Home in Abingdon, as it was the only public place in town. Some of the people in attendance that night were Lester Tucker, Joe Babka, Eugene McComas, Kennard McComas, Norman Davis, Harry Moulsdale, Will Harwood, George Price, Roy Stifler, as well as other local citizens. It was described that as the discussion got somewhat heated, Will Harwood stood up and said “Let's not carry buckets, let's get a real fire engine”. That moment was credited as the birth of the Abingdon Fire Company. Will’s enthusiasm continued to play out he later served as Chief seven of the following ten years.

In 1926 a new Dodge chassis was purchased, and a body built in Wilmington, Delaware. It had three forty gallon chemical tanks piped to two booster reels mounted top-side. It carried no water except in the chemical tanks. The tanks contained five pounds of soda mixed with the water and a four ounce bottle of sulfuric acid that, when broken, would charge the tank to about 350 psi. The mixture was created uniformly by a four bladed paddle cranked by hand as the engine approached the fire. The engine carried enough spare soda and acid to charge the tank three times. Extra water to recharge the tanks, if necessary, came from the home owners well, or a barrel kept by the owner for fire protection. When that water was depleted the fire had better be out.

The engine was delivered that year and was housed in a wooden lean-to attached to Lester Tuckers' barn. During that time, fire calls were received by the local telephone operators who forwarded the information to Tuckers' store. (This method of notification continued to the mid 1950’s when it was replaced with the advent of the first Fire Headquarters) Mr. Tucker would pull the engine out and sound it’s siren to notify the rest of the firemen.

In 1930 construction of a new firehouse located on Abingdon Road across from Cokesbury Methodist Church was completed. It wasn’t until that time until the firemen had access to protective clothing. Protective clothing was bought because of an incident that occurred at a barn fire when an object fell from the roof and struck one of the firemen on the head. At the next company meeting, they voted to buy four metal helmets, and four rubber boots. Also in that year a new chemical engine was purchased to replace the previous one. The new engine had the latest refinements; it had a 100 gallon per minute rotary pump piped to a 100 gallon water tank and three chemical tanks supporting two 1” booster reels. The fire company progressed through the 1930’s, and the records indicate they answered about thirty five calls per year. In 1940 it was necessary to replace the chemical truck. The company purchased a 1940 Model EH50 Open Cab Mack Pumper.

In 1950, the company expanded the firehouse with two new engine bays to accommodate a new 1200 gallon tanker mounted on a 1950 Chevrolet chassis at a cost to the company $1900.00. A member of the company who was a metal smith built the body for the cost of the material.

In the mid 1950’s the local population began to increase, and the company voted to build a second fire station and locate it in Long Bar. The second station was completed in 1958. The 1940 Mack Pumper was moved to that station and a new 1957 B Model Mack Closed Cab Pumper was purchased which became the pride of the company. In 1959 the company added a light duty Rescue Truck build on a International Chassis, and a 17 foot aluminum rescue boat the following year. In 1965 another new Mack Pumper was purchased to replace the aging 1940 open cab Mack at the Long Bar station.

In 1968 the company, after much debate, voted to purchase its first ambulance; a 1968 coach mounted on a Oldsmobile Chassis. The company was already responding to all automobile and truck accidents and rescues in its territory since the purchase of the rescue truck almost 10 years earlier. The company at that point had a large number of personnel trained and was ready to begin ambulance service. The first year with an ambulance in service the company responded to 325 ambulance calls, much to the relief of Joppa Magnolia, Bel Air and Aberdeen fire companies. 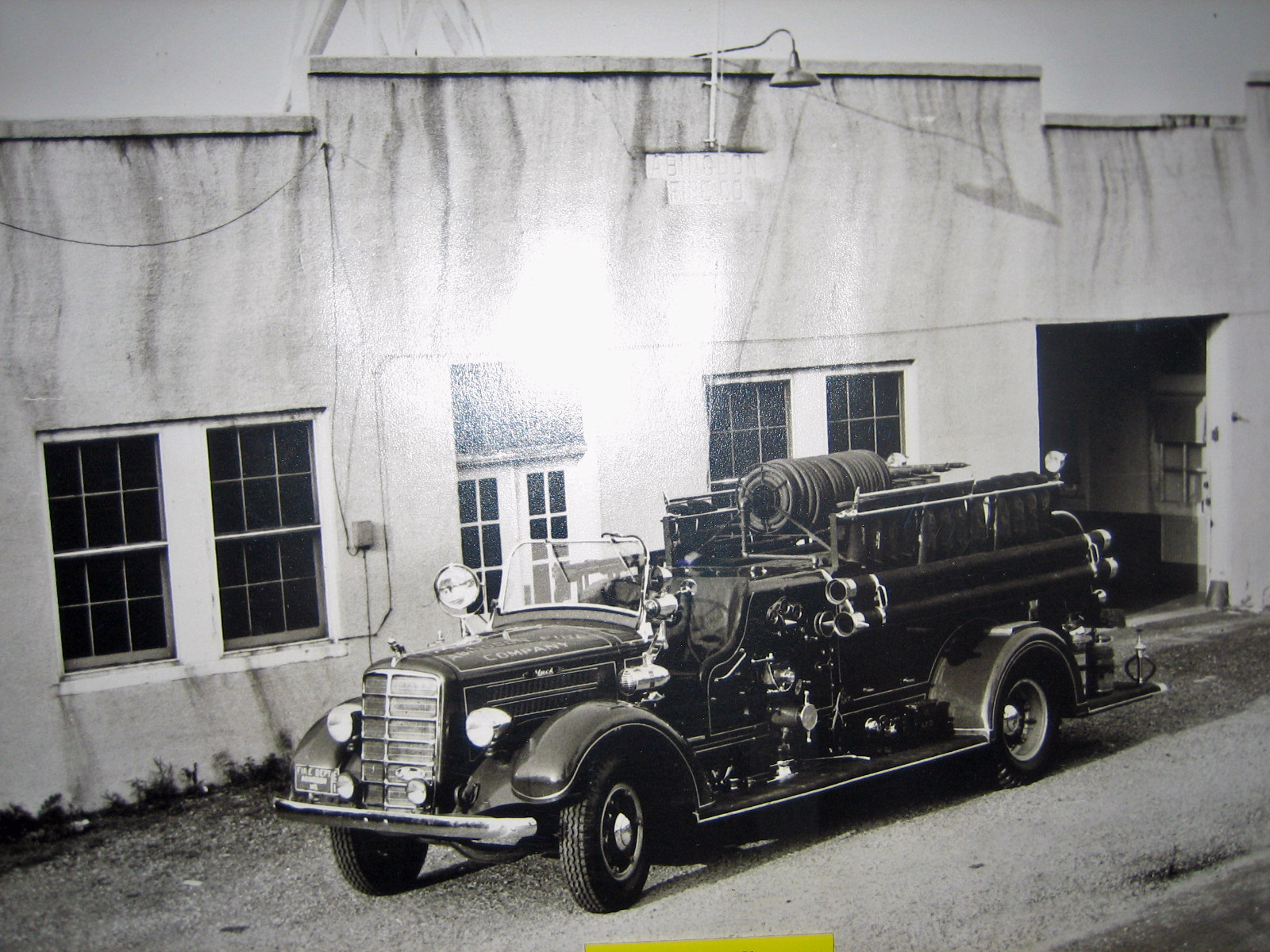 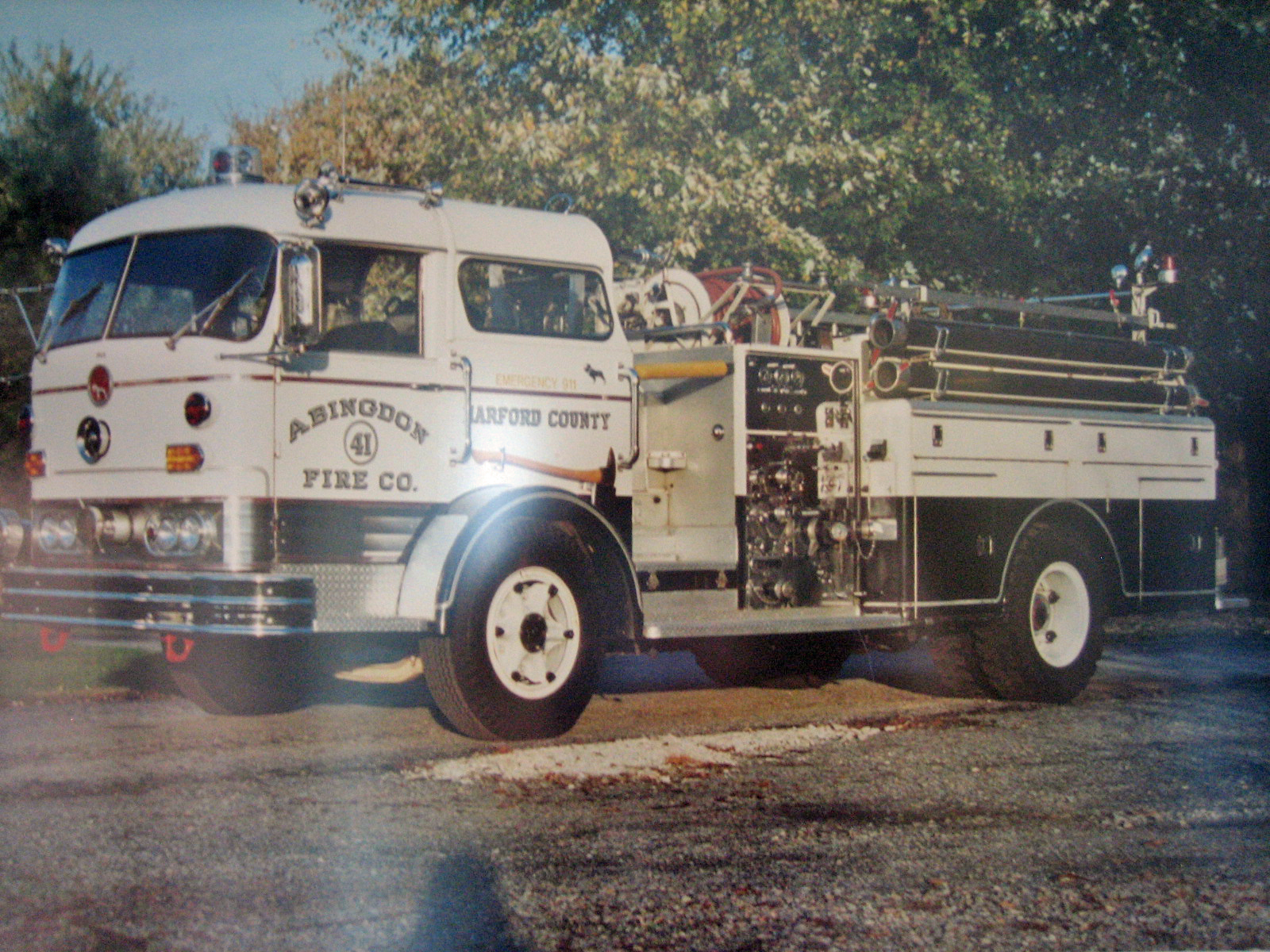 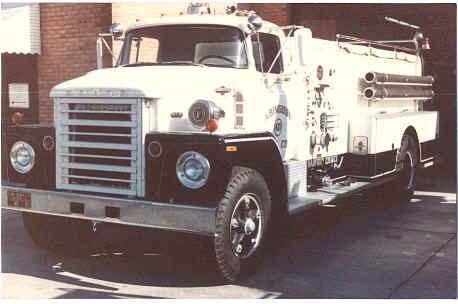 In the 1970’s the fire company began to feel the results of the recent new Harford County Master Zoning Plan designed to manage future industrial and residential development. This plan included the area beginning with Bel Air heading south to include what is known as the Route 24 and Route 152 corridor, west to the Baltimore County Line, and east to Havre de Grace. This plan placed Abingdon in the center of the expansion plans for the county. Increasing the resources available to the company became a priority. The 1970’s witnessed the company build a third fire station to be located in the Edgewood area of Willoughby Beach, the addition of two engine bays and administration area at the Abingdon station, the purchase of two new engines to replace the 1957 and 1965 engines, the replacement of the light duty rescue truck with a heavy duty rescue, and a new tanker with enhanced pumping capabilities.

The 1980’s witnessed a continuing increase of the population in our area resulting in an increase of emergency calls. Our EMS calls were approaching 2000 and fire calls nearing the 1000 mark. It was at this time the company added a ladder truck and an additional ambulance. 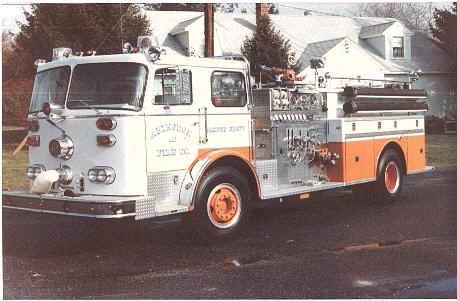 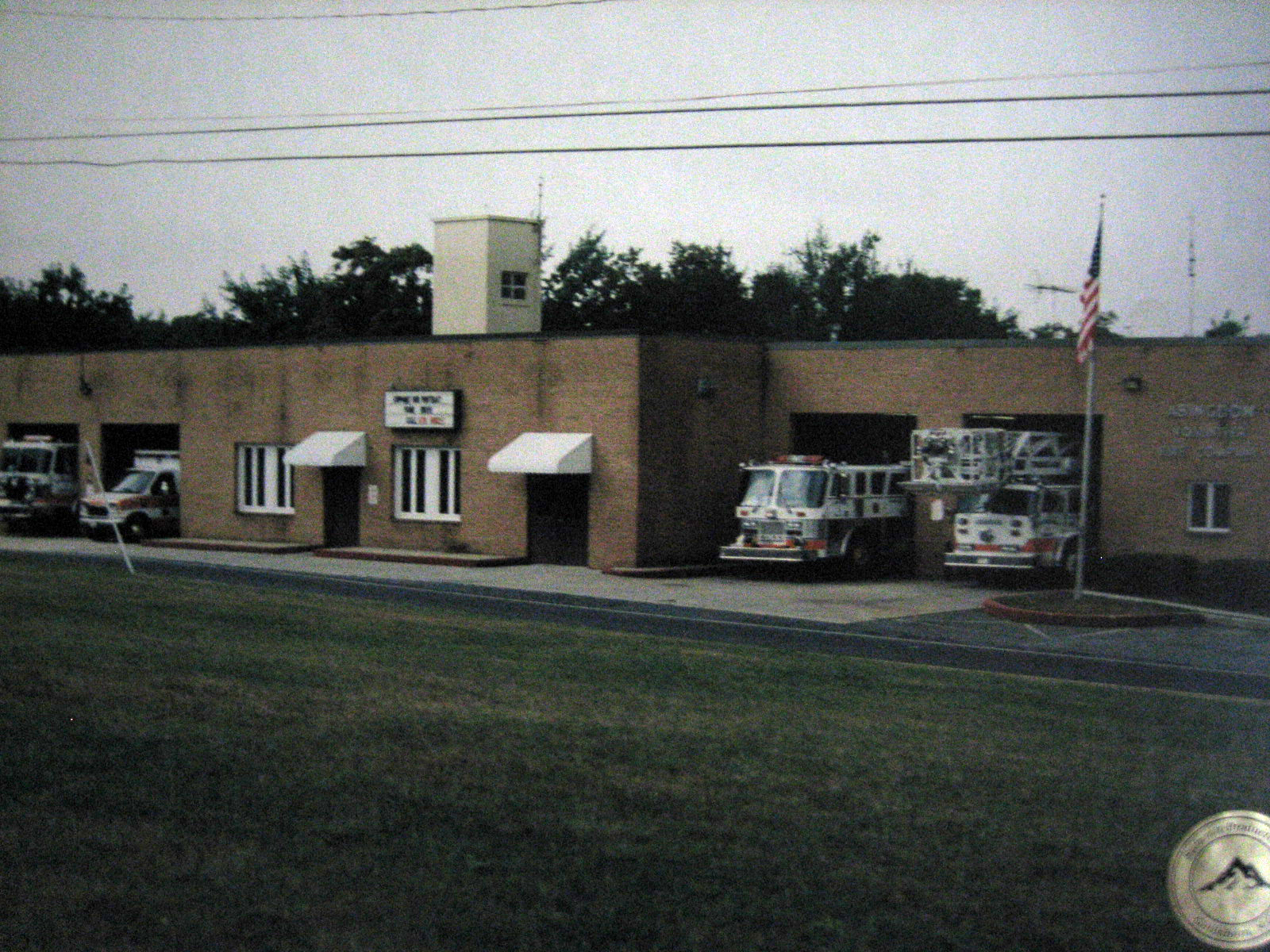 Evolution of the Company

The 1990’s became a real challenge in terms of adequate resources to replace outdated equipment, recruit additional members, and expand facilities to meet the emergency needs of the community. Meeting these demand was accomplished through the tireless efforts of our members, along with the financial support of the community and Harford County Government. With that extraordinary effort of support, a new fire station was constructed and dedicated in 1995 on Abingdon Road, not too distant from the old one. In 2006 a new fire station was constructed in the Willoughby Beach area of Edgewood replacing the older one build in the seventies. The new stations were designed to carry on the mission of emergency response to meet the needs of the local community and Harford County well into the 21st Century.

The Abingdon Fire Company has worked hard and continues to work hard serving out their mission which is to “Protect the lives and property of the citizens of our community and Harford County”.

Our continued dedication to serve the community gets it's humble beginnings in 1925 when Will Harwood’s inspired the birth of the Abingdon Fire Company when he said:

“Let's not carry buckets, let's get a real fire engine”.

This is our proud history; what we accomplish today and next year will become the history for the generations that follows.